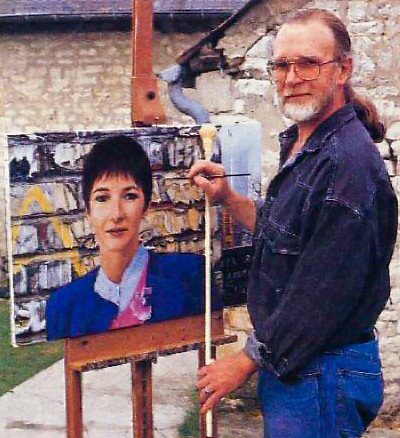 Raphaël Gyllenbjörn was born in a French provincial family. His working-class parents turned a deaf ear to the teacher who told them Raphaël was exceptionally gifted artistically; they wanted their son to become an engineer and, since the family couldn't afford to pay for future studies, he enrolled into the French navy which provided him with an excellent free education.

Raphaël was a brilliant student and, having specialised in advanced missile technology, was awarded a gold medal. He embarked on a teaching career and chose the naval city of Rocheford as his base.

In the chaotic aftermath of 1968 he deserted from the French armed forces for political reasons. He fled to Sweden, later adopting Swedish nationality and changing his name to Gyllenbjörn, meaning Golden Bear.

Encouraged by his future wife, who was convinced he had a great career ahead of him, Raphaël began to paint. After five years of intense work he was ready for his first exhibition which took place in a distinguished gallery in Stockholm and was acclaimed by critics. The same year he was invited by the French Cultural Institute in Stockholm where he had his second exhibition.

In 1982 he and his then still future wife (they married in 1987) left for Italy, where they stayed for seven years. Raphaël painted in a medieval house at the edge of Seborga, a village - or, more precisely, an ancient duchy - situated in the hills behind the Italian Riviera. During this time he had several one-man exhibitions in Italy and France,
and also participated in a number of group exhibitions. 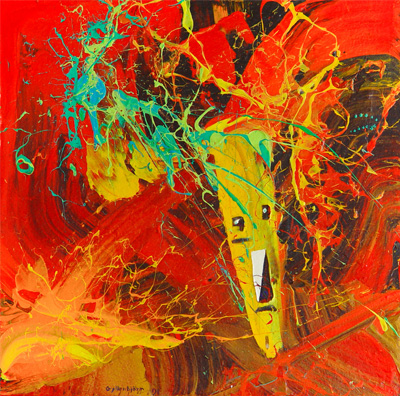 In Denmark, where Raphaël and his wife moved in the late 80's, he also had a few one-man exhibitions before the couple moved to France, where he had several exhibitions and also participated in group exhibitions. His nomadic existence continued.

After France he and his wife spent one year in Liège, Belgium, where he had what was to be his last exhibition. In 1996 the couple settled down in Mojácar in Southern Spain, where Raphaël was to spend the last seven years of his life.

In Spain a whole new horizon opened up for him. As both artist and scientist - very much a Renaissance Man - Raphaël became fascinated by computers. He immersed himself completely in creating a gallery of digital art, developing to the utmost his theories of three dimensional depth. A strange, complex world pulsating with colours ensued from the meeting between artist and computer. He was about to finish completing his own website when he suddenly passed away, at the age of 55.

Throughout his painting years a circle of enthusiastic fans grew as Raphaël explored and developed several different styles, all conveying intensely felt intuitive and emotional experiences. Many were inspired by American abstract expressionism launched by Jackson Pollock, and by European expressionism developed by the Cobra group - although he often said that art should not be limited by concepts.

"The miracle of art is the way it hints at a reality that remains forever impalpable", he wrote in the catalogue of his first exhibition, in 1981.

In many ways this statement contains the key to his work throughout his life as a painter. Almost certainly it is a sentiment he would reiterate were he still with us today.