The history of the missing Grace Kelly portrait 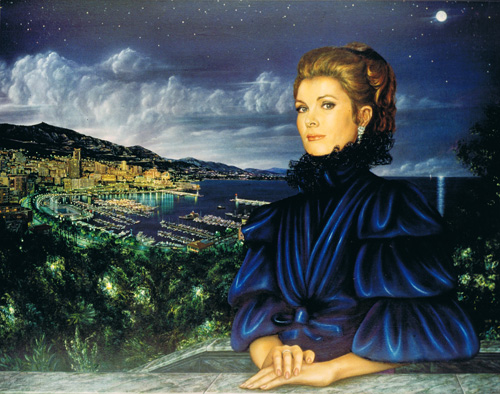 Raphaël and I arrived in Seborga, Italy, at the end of August 1982. On the fifteenth September we read on a newspaper board outside one of the small grocery shops in the village that Grace Kelly had died in a car accident above the principality of Monaco.

Some time later Raphaël, always fascinated by female beauty, said he wanted to do a portrait of Grace Kelly as a kind of homage.

Once it was finished (it took him more than six months to complete) we thought it might be an idea to hang it in one of Seborga´s main tourist restaurants, and later, for some reason I can´t remember, it was transferred to the oldest bar in the village, Osteria dei Cacciatori (The Hunters´ Bar) where Her Highness graciously supervised old men playing cards and drinking red wine. After some time there we brought the portrait home to the small house we rented and hung it on a wall in Raphaël´s room.

Then it so happened that a friend of a friend of ours who visited Seborga saw the portrait and had a coup de foudre – he absolutely must buy it,there and then! He was a supposedly successful businessman, but he didn´t have the cash to pay the modest sum Raphaël asked for the Princess so he offered to leave his smart camera as a deposit and promised he would pay the rest within a week. As we could never have afford to buy such a camera we said yes, fine, see you soon. He took the painting and drove back to Monaco where he lived and ran his business, and that was the last we saw of him. A short time later his company went bankrupt and his assets were confiscated, among them the portrait of Grace Kelly.

What could we do about this unhappy situation? Nothing. But Raphaël had a splendid camera and we had things to do other than chasing a mirage, so we forgot all about it. Until the mother of the owner of the restaurant in Seborga where the portrait had hung for the first couple of months said that she had seen it in a chapel in Monaco. She was absolutely certain, after all she had admired the painting in her daughter´s restaurant for months, she knew what she was talking about. She described to me exactly where the church in Monaco was situated and I drove there. I was lucky enough to see the priest and I told him the story about the old lady from Seborga who claimed she had seen Raphaël´s portrait of Grace Kelly hanging in his church, but he promptly denied any knowledge of it.

A friend recommended I wrote a letter to the royal court of Monaco, asking if they had by any chance seen the portrait anywhere, and I actually got a polite but negative answer from their press secretary. Since then the whereabouts of Raphaël´s portrait of Grace Kelly is a mystery. If anybody has a clue, please contact us.